In the world of homemade cocktails, this Brandy Sidecar recipe is one which makes a great foundation for building upon and adding your own unique twist by including variations of favourite ingredients. It’s a simple cocktail that traditionally includes a spirit, a sour and a sweet that results in a tart, spirit-forward drink! 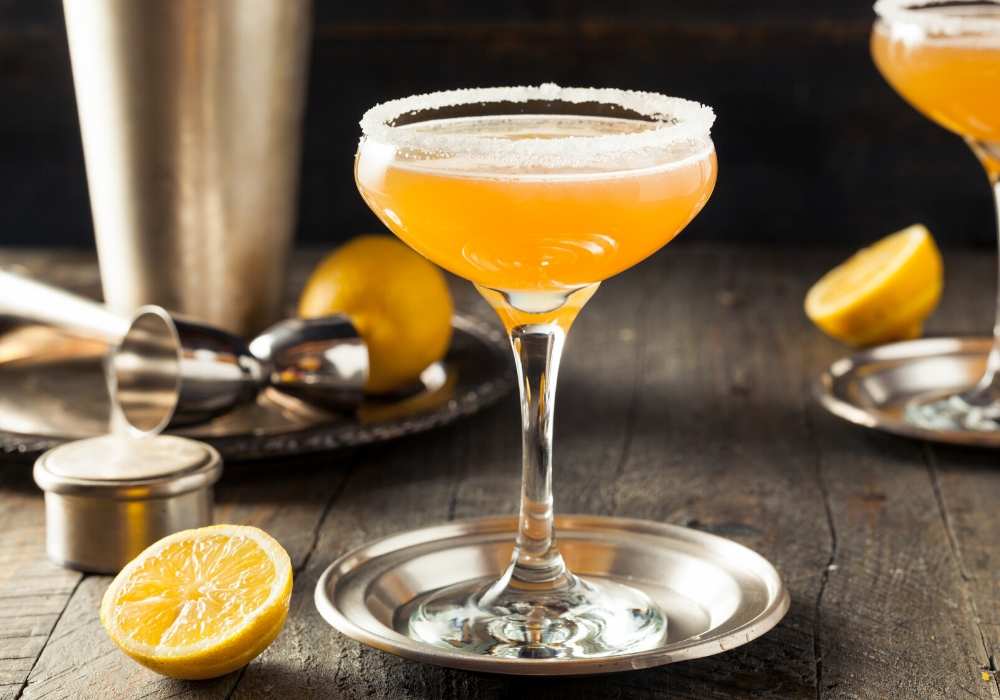 This orange brandy cocktail is no exception. In this recipe, I’ve adapted the classic sidecar cocktail to include the citrus flavour by adding orange juice and orange liquor. Together, these ingredients bring colour, warmth and a touch of sweetness to this traditional sour cocktail.

The History of The Classic Sidecar Cocktail

The sidecar is a cocktail that any respectable bartender will know as this classic has been around since the last days of World War I. In the case of this drink, on the one hand, an unknown soldier in Paris, according to the bartender David A. Embury.

It became so popular among the hotel frequenters that it naturally followed them to their home countries, creating popularity around the globe. From there, locals in other parts of the world have created variations of this sidecar cocktail.

On the other hand, Harry MacElhone from the world-famous Harry’s New York Bar mentions bartender Pat MacGarry as the inventor of the drink in his book Harry’s ABC of Mixing Cocktails, but for unknown reasons in later editions he sweeps him under the table to crown himself as the inventor.

It is still unclear – and will probably remain so forever – which of the two is right here now, even if most of them tend more towards MacElhone. Other things are clear: Originally, the sidecar was created from Brandy Daisy, a very similar cocktail without Cointreau, but with sugar syrup and Chartreuse.

Where the name comes from

It is also clear that the Sidecar is named after the sidecar of a motorcycle and is mixed in the first recipes in a ratio of 1:1:1 – “French School” is the name of this variation. The “English School”, added later, doubles the proportion of cognac.

The sugar rim was added for both variants sometime in the 1930s after prohibition, but is still a frequent point of contention today – after all, the decoration for a classic cocktail is already very playful.

Although this version shared with you today is not especially the classic sidecar recipe, it offers a much lighter version which has made it one of my favourite among all the brandy cocktails out there and a must-try if you are looking to make something simple and refreshing! 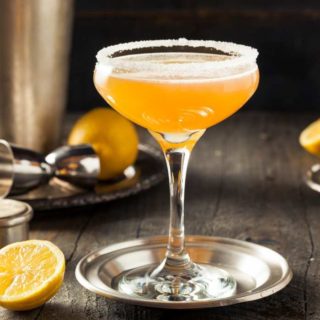 About Susan 102 Articles
Hi, I am Susan. I love the art of cooking and I love life! Also am keen to inspire you and try out new ways of cooking. Here on My Golden Pear I write about the latest food trends, recipes and share my travel discoveries. As I am German by birth, you will also find many authentic German recipes here. Enjoy!

Hi, I am Susan. I love the art of cooking and I love life! Also am keen to inspire you and try out new ways of cooking. Here on My Golden Pear I write about the latest food trends, recipes and share my travel discoveries. As I am German by birth, you will also find many authentic German recipes here. Enjoy!

Pear crumble is a delicious dessert that can be eaten warm or cold. It’s basically pears topped with buttery brown […]

Apple Crumble is a favorite dessert for many and for a good reason. This is another recipe that will take […]

Succulent chicken thighs are coated in a mixture of breadcrumbs, cheese, paprika and garlic and baked until golden and crispy. […]

Prawns with Red Curry and peanuts

An amazing diner recipe, that is quick to prepare. If you like it spicy, you will love this recipe. This […]

This rather delectable Chicken Casserole ticks all the boxes for a warm and comforting Autumnal meal. I could go on […]